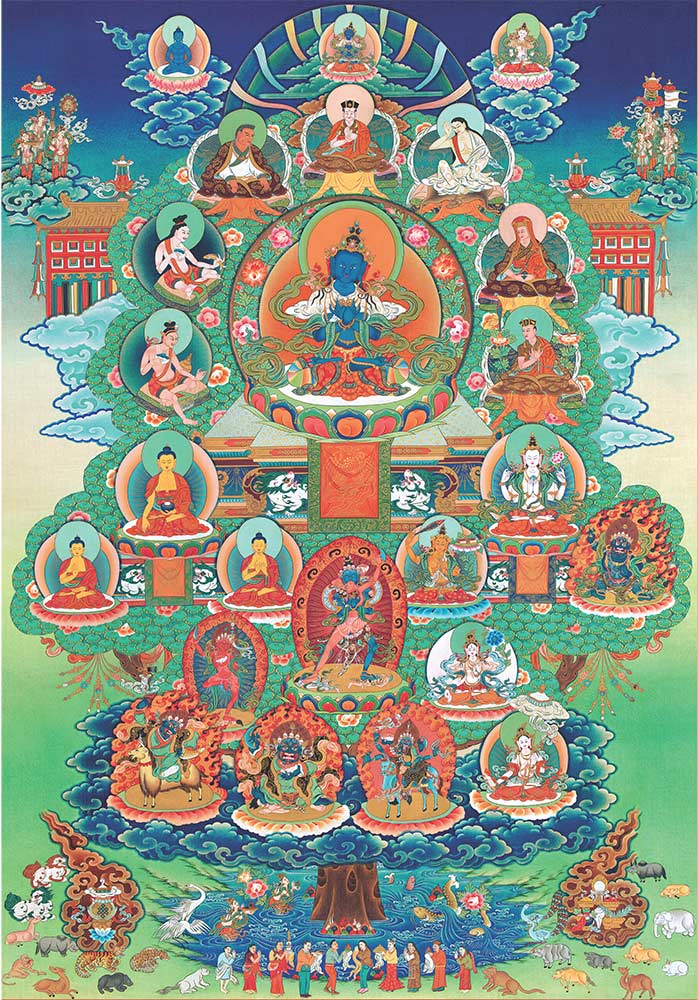 The history of this lineage goes back to India. Tilopa, a 10th century Buddhist master, was an important figure, as was the Buddhist master Saraha. The Karma Kagyu itself is a sub-school of the Kagyu tradition, and is named after its founder, the Karmapa. It began in Tibet in the 12th century with the first Karmapa Dusum Khyenpa (1110-1193). He was the disciple of Gampopa (1979-1153). He received comprehensive instructions based on the entire corpus of the Buddha’s teachings and achieved supreme realization. His reincarnation, the 2nd Karmapa Karma Pakshi (1204-1283), was the first recognised reincarnated lama of Tibet. Ever since that time, the Karmapas have manifested in a successive line of reincarnations until the present day, always heading the Karma Kagyu school.

The primary sources of the Karma Kagyu lineage are the “words of the Buddha” translated into Tibetan, i.e., the Buddhist Kanjur canon, in addition to the commentaries to the Kanjur, known as the Tenjur. Masters of the lineage such as the 3rd Karmapa Rangjung Dorje (1284-1339) and the 8th Karmapa Mikyo Dorje (1507-1554) have made significant contributions to the many volumes of the Kanjur and the Tenjur teachings that are also studied and practised. Their works are widely acknowledged scholastic treatises on the sutras and the tantras.

The Karma Kagyu inherited two very important streams of spiritual traditions: Mahamudra and Kadampa. Mahamudra, or the Great Seal, is the direct insight into the nature of mind. It is the highest meditation training and a unique feature of the Karma Kagyu tradition. It can – but does not necessarily – involve the methods of the so-called Six Yogas of Naropa (1016-1100), tantric practices that work with subtle energies. The gradual path of the Kadampa teachings traces itself back to the Indian Buddhist master Atisha (980–1054), and incorporates the Mahayana Mind-Training practice (Tib: Lojong).

The original of this text is published on the official website of Thaye Dorje, His Holiness the the 17thGyalwa Karmapa. To learn more about Kagyu Lineage and it’s Masters, please visit karmapa.org