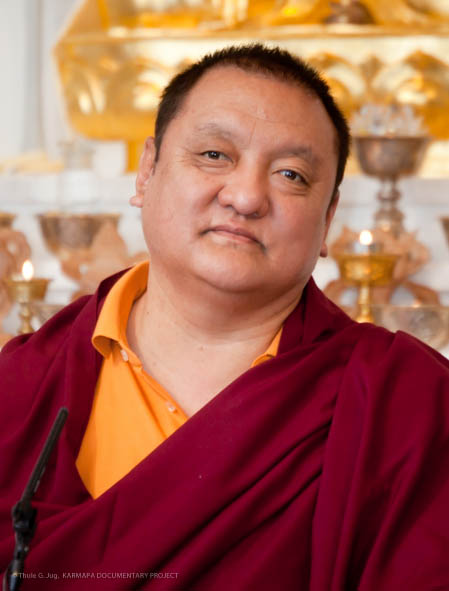 Mipham Chokyi Lodro was born on the 27th October, 1952 in Eastern Tibet, in the Kingdom of Derge, into the noble Athub family, as the nephew of the 16th Karmapa.

While in Rumtek, the 16th Karmapa bestowed on the Shamarpa the complete teachings and transmissions of the Karma Kagyu school. He received multiple transmissions from many great Masters as well.

During the lifetime of the 16th Karmapa, the Shamarpa had travelled extensively as the Karmapa’s representative and future regent.

Since the passing away of the 16th Karmapa, Shamar Rinpoche had continued to care for the monks and nuns of the lineage and provide them with education.

As lineage holder, Shamarpa recognized and naturally became the root teacher of the 17th Karmapa, and returned to him the entirety of the Kagyu lineage transmission, fully training and empowering him.

The 14th Shamar Rinpoche Mipham Chokyi Lodro passed away aged 62 at his Bodhi Path centre in Renchen-Ulm, Germany, on 11 June 2014.

To know more about the life and projects of Sharmar Rinpoche, please visit his page on karmapa.org or his official website: shamarpa.org

In 1992 the Karma Kagyu studies for monks in Rumtek have been interrupted. From then on, Kunzig Shamar Rinpoche thought a lot about making a new place in order for studies to continue. In the same time in Kalimpong, the Gyanjyoti family offered their cottage with two acres of land. The weather was perfect and the place beautiful, so Rinpoche chose this place in Kalimpong for the residence of the Karmapa and the new Academy named Diwakar. Since 1997, Karmapa was staying and studying here.

In 1996, Rinpoche made all the plans of the new Academy in Kalimpong and the foundation was built. Construction lasted till 2002.

In February 2002, Shamar Rinpoche, the Gyalwa Karmapa, and many important guests inaugurated the Shedra. In the beginning, only 16 students attended the class, with around 6 teachers. Rinpoche himself, with Professor Sempa Dorje, created the curriculum for a full 8 years program of studies.

Rinpoche came every year, giving advice and checking that everything was going properly. He also taught the melody of Mahakala prayer and poetry.

Today, thanks to the wishes of Kunzig Shamar Rinpoche, more than 300 monks are studying in the Academy and Takdah school under the wise guidance of His Holiness the Gyalwa Karmapa and Jigme Rinpoche.

In the middle of September 2004, Shamar Rinpoche was teaching poetry in Diwakar to the first batch of students including the Gyalwa Karmapa and 34 others.

He taught the second chapter of the Kavyadarsha “The Mirror of Poetry” written by the Dandin, Indian Sanskrit writer. Rinpoche was teaching in the corner of the third floor’s classroom. That classroom was very cool, and we could open the windows so fresh air was passing through. We could also see the trees and leaves moving with the wind. Rinpoche used to write some examples and explanations with chalk on the blackboard. He was a very skilled poet and wrote many poems in a wonderful style, i.e. the life story of the Sixteenth Karmapa. It was so beautiful and very clear.

During that period he was quite busy. Yet every morning around 8 o’clock he came from his residence situated two kilometers away to teach the poetry class.

Even though we were just beginners, he explained it in a very understandable and simple way. When Rinpoche was teaching, we were never getting bored, it was always interesting. The way he moved his hands, and his explanation and expression, even though we didn’t understand everything, filled us every time with joy.

Every day he collected our poems and took with him to his residence. In the morning we would get it back with the corrections. We were always so excited to write poetry, but as beginners, it was very long to write even a few lines. We always put many funny words together in order to write poems, but Rinpoche was always very kind and corrected patiently the many mistakes we made, with his own red pen. During that time, every morning we got the opportunity to see our great master with his compassionate smile.